Have you always wanted to visit Gampo Abbey  or Kalapa Valley but don’t know how to get there and/or need a guide?

This tour may be of particular interest to people doing Shambhala retreats at Dorje Denmaling near Tatamagouche or visiting Halifax.

Cabot Shores is the ideal place to begin a tour of  Kalapa Valley,  the Stupa of Enlightenment at Gampo Abbey and the Cape Breton National Highlands Park in between.  We are located 1/2 hour from Kalapa Valley on the Atlantic side of Cape Breton and we are a Shambhala business.

We offer complementary meditation and Qi Gong to our guests every morning; we can give presentations of both Kalapa Valley and Gampo Abbey;  and on request, we can even take you to both places.

Hike to the waterfalls of Kalapa Valley and spend some time sitting by the Ashe pole.  Enjoy the open, grassy valley, the lively Ingonish river, the beautiful wild flowers, trees and perhaps spot a moose or eagle.

Then drive through the National Park to Gampo Abbey.  Visit the Stupa of Enlightenment, dedicated to world peace,  on the grounds of the abbey and circumambulate it while contemplating one of the Lojong Slogans.  During July and August, on weekday afternoons, you may want to participate in a tour of the Abbey, learn about Shambhala monastic life, and visit the amazing shrine room overlooking the Gulf of Saint Lawrence.

From the garden of the Abbey, you’ll occasionally spot a pod of whales off the coast.

These two sites are very important to the Shambhala and people from over the world come to visit them.  The importance of the Kalapa Valley is noted by Sakyong Mipham Rinpoche, the current lineage holder of  Shambhala: ““While the capital is in Halifax, the secret heart centre is in Kalapa Valley…. Its energy is essential to propagating Shambhala…”

The Sakyong’s father, Chögyam Trungpa Rinpoche originally identified the sacredness of  Kalapa Valley, as he did the location of the Gampo Abbey.  Under his auspices, Gampo Abbey as a western Buddhist monastery  following the Shambhala tradition was founded in 1983.

The  first director and current resident teacher of Gampo Abbey is Acharya Ani Pema Chodron.  Pema Chodron is the author of a number of books that have great influence on people, regardless of their faith,  including:  The Wisdom of No Escape, Start Where You Are, When Things Fall Apart, The Places that Scare You, No Time to Lose, Practicing Peace in Times of War, Taking the Leap – Freeing Ourselves from Old Habits and Fears,  and  most  recently Living Beautifully with Uncertainty and Change.

By clicking here, you can watch a video about Life at Gampo Abbey as narrated by Pema Chodron.

Here are the locations of Gampo Abbey, Kalapa Valley and Cabot Shores on Cape Breton Island: 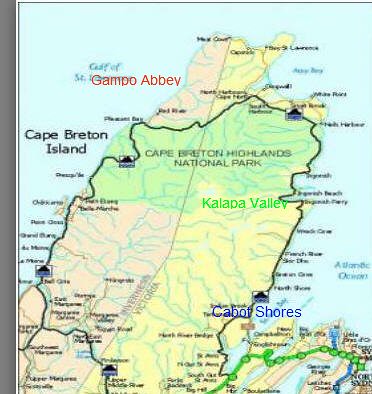