“Been fishing over 30 years and this is the first Right Whale I’ve seen,” said Captain Cyril Fraser of Oshan Whale Watch,  which is based in the village of  Bay St. Lawrence, Cape Breton.  A fifth generation fisherman, Cyril mostly sees Pilot and Minke whales and dolphins.

“The Right Whales are around 50 tons, compared to the Minkes and Pilots   which are more like 5 tons.”

One of our guests from Ontario, Tullio d’Angelo, provided us with a the snapshot  of the Right Whale taken off while with Captain Cyril. 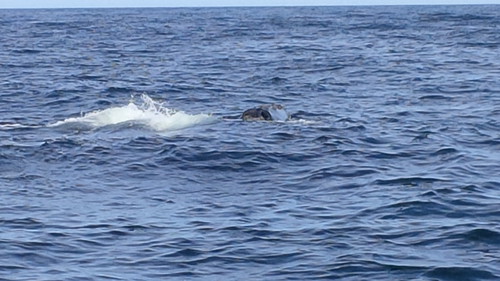 According to wikipedia, the Right whales making it to North Atlantic waters (pictured above) like to stay along the coastline, close to shore, which is consistent with what Captain Cyril and Tullio saw on their tour along the Cape Breton Coast going from Meat Cove to Cape North.

Waterfalls and seals might not interest the whales but are often  delightful surprises for guests to the Cape Breton coast. Whale sightings are frequent in late summer and in the fall. Here is a pilot whale.

Further south, just today, off Indian Brook, we saw whales traveling spouting not far from our beach. Traveling in a pod toward St. Ann’s Bay, they probably were on the trail of mackerel which heads in great numbers toward Englishtown.

From Whiff’s lodge we saw them through binoculars.  Local fisherman near the Englishtown Ferry are noticing the mackerel increasing in number and in size — a good sign for fall fishing, including that done by local whales.