People have an insatiable wanderlust to travel to different parts of the world, often wanting to visit the places which are not only far away but are also serene and majestic. One such location is the Cabot Trail which is located in the scenic province of Nova Scotia, Canada. The highway transverses through a picturesque 298 Kilometers-long route and passes through hills and rivers and alongside a coastline that provides some breathtaking views of the ocean. The place is named after the explorer John Cabot who landed in Canada in the late 15th century. The Cabot Trail also passes through the Cape Breton Highland National Park making it a one of a kind ‘Into the Wild’ experience. If you are a kind of traveler who enjoys the journey more than the destination or want to drive off to scenic roads, here are the top reasons why the Cabot Trail should be your pick. 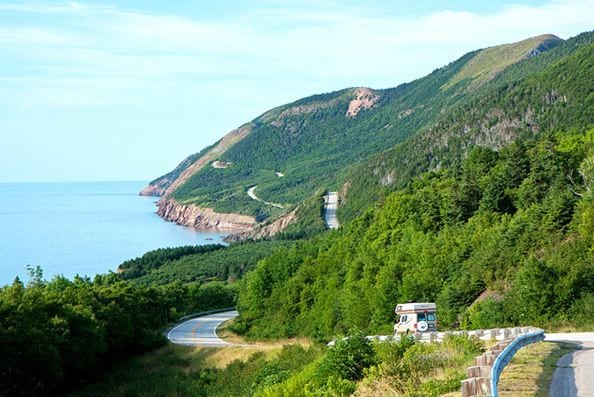 Photo by Andrea Schaffer, CC BY 2.0

Being ranked by several travel magazines as one of the most picturesque drives in the world, the Cabot Trail is a must for bikers from across the world and is certainly one of the most famous motorable mountain passes in vein of high mountain passes in India, China etc. If you want to experience the drive in your convertible top down, the Cabot Trail will offer you a few of the most majestic views of the Atlantic Ocean. The drive also passes through the wildlife paradise of the Cape Breton Highland National Park which is home to numbers of moose, and a large variety of flora and fauna.

After a long drive there is fair chance that you might feel the need to refuel your vehicle and your body. If you are foodie and like to try some great seafood then you are at the right place. Cape Breton’s seafood is equally famous to that of Maine and is really affordable to buy. While the island looks pretty much relaxed with a fairly low population, it is one of the much favored foodie destinations in Canada. Lobsters, Lobster rolls, Blueberry cobbler, Lobster ravioli, Lobster sandwiches, Seafood Chowder, Maple-Glazed Salmon  are a few of the seafood dishes that are a must try on Cape Breton.

The island has been known to have a deep Scottish and Celtic influence, which is showed off most flamboyantly during the annual Celtic Colours Music Festival that takes place in October. The festival is known for featuring  international and local artists and a plethora of cultural events like music, dances and other performing arts. The festival lasts for 9 days which are filled with fun, frolic and madness as few of the best musicians, storytellers, dancers and other artists from Canada, Scottland and the US perform in 40 venues throughout the island, and at the Gaelic College each night at 11 pm and the music where the celebrations go on till 3 am.

The Cabot Trail not only offers a fantastic drive and scenic beauty but also passes through the biologically diverse region of the Cape Breton’s Highland National Park. The park is rich with spectacular views of the mountains, the Atlantic and the Gulf of St.Lawrence, along with a diverse flora and fauna species that are housed here. The terrain mostly consists of Acadian forests with mixed deciduous and coniferous forests on the lower elevations and boreal forests on the higher lands and plateaus. The park is home to several American wildlife species such as the Black Bear, Moose, Bald Eagles and Coyotes etc. Whales can also be viewed from the Cabot Trail.

The above mentioned activities are just a small fraction of the countless tourist activities you can access in Cabot Trail and Cape Breton. Luxury vacationing is extremely affordable and can easily fit one’s pocket even during the peak tourist seasons. The finest resorts on the islands aren’t overly expensive due to the untouched and undiscovered location that Cape Breton is. The island has several activities to offer to the tourists such as Camping, Canoeing, Whale Watching, Hiking, Fishing, Bird watching, Horseback Riding and Kayaking etc. as well as cultural experiences that include Ceilidhs (original Cape Breton music), visits to Artisans studios including leather working, painting, woodworking, pottery, quilting, glass blowing, iron art and more. No matter your age or preference of activity, the Cabot Trail and Cape Breton have something to offer each tourist type.

Cabot Trail is a largely undiscovered tourist gem that every nature lover or adventure junkie should visit at least once in a lifetime. The 200-mile drive is sure to refresh your senses and is essentially a highway to paradise.

Rohit Agarwal is a traveler and likes to visit the various undiscovered tourist destination across the globe. Being a professional architect he also likes to study the ancient architecture and often likes to visit places which have been long standing examples of human architecture and engineering. He is also a content contributor for Transindiatravels.com that is a great place to know about the various tourist destinations in India.