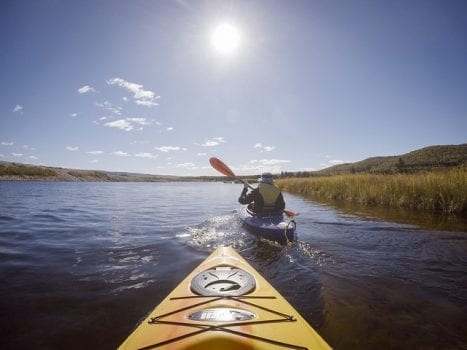 Spring’s thaw signifies renewal, especially here on along the eastern edge of Nova Scotia’s enticing Cabot Trail. As the weather warms and the creatures of the land begin the survey their territory, thousands of nature enthusiasts flock to Cabot Shores, home to the island’s most diverse and adventurous accommodations. The island plays host to a wide variety of outland experiences, such as hiking inside Cape Breton Highlands National Park, backcountry glamping, and revitalizing wellness retreats. But the preferred method of exploration here at Cabot Shores is a paddle and watercraft combo, as there are countless aquatic acres just a few strokes from our private beaches. Oh, and it’s a piece of cake to locate a kayak on Cape Breton Island as we offer daily rentals starting at just $40.

Kayak on Cape Breton Island with Family and Friends

Because kayak, canoe, and stand-up paddleboard rentals start at only $40 per craft, thrill-seekers from all across the region visit Cabot Shores during the summer months, even those who aren’t staying with us. There are three main, on-site water sources that all paddlers can enjoy: the tranquillity of Church Pond, the vastness of the Atlantic Ocean, and the rush of Indian Brook. Skilled kayakers can enjoy all three. Families and novices typically explore the many nooks and crannies of reflective Church Pond.

For those who’re aiming to spade into the Atlantic, we highly recommend double-checking this handy tide chart. The Atlantic doesn’t play around; it’s only worth surveying in the morning (the earlier, the better) and perhaps around dusk. There’s nothing quite like paddling along the outer banks of Cape Breton Island, where dramatic cliffs, uninhabited isles, and pristine beaches await.

Indian Brook, meanwhile, is a distinctly patient water source. Its calm, soft waves make it one of the most desirable places to kayak on Cape Breton Island. And we have exclusive access to this quiet, undeniably picturesque brook. While we don’t recommend trying to venture all the way to Great Falls, most kayakers can easily paddle upstream to Cabot Trail’s tall bridge.

After each full day of exploration, return to Cabot Shores for gourmet coastal cuisine, a hot tub soak at dusk, and some award-winning dome camping. We also boast an array of Cape Breton cottages, yurts, and chalets, each one more charming than the last. For those who plan to kayak on Cape Breton Island, we urge you to give us a call at 866-929-2584. Our team has insider knowledge of the best backcountry streams, oceanside launches, and hidden lakes!