Guess Who Greeted  Liam and Janet and Isabel ?

An adventurous family from Newfoundland believes it’s not too cold to stay in a Yurt.  So they did, at Cabot Shores…

And this morning, first thing Liam saw and photographed was a moose just below the Yurt…

Liam’s “day job’ is that of brewmaster at the Yellow Belly Brewery in St. John’s, Newfoundland.  He is an experienced

brewmaster, trained in Toronto, and loves Newfoundland–also a land of many moose.  But he, wife Janet and

daughter Isabel were pleasantly surprised at Yurt living and delighted to see the Moose.

Two worlds of Liam and Janet’s family,  pictured side by side: 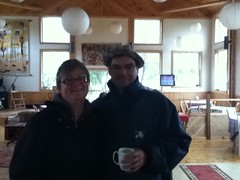 Janet and Liam telling their story in the lodge