Did the Chinese actually explore Cape Breton before John Cabot & the Europeans?

A documentary film crew stayed 4x at Cabot Shores over the last 3 years
and now the film “Mysterious Ruins: Cape Breton” is shown often on the history channel.  The one hour documentary was replayed most recently on March 29th.   (Best scheduling is followed on history.ca.) 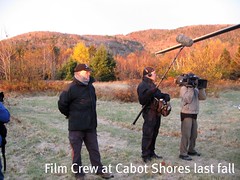 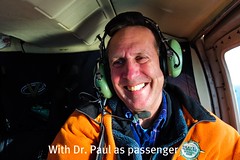 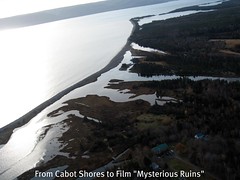 In the film you’ll see the helicopter take off from Cabot Shores–and land along a path leading to our apple orchard. The film helicopter then heads over Church Pond to Kelly’s Mt. and Cape Dauphin. Some of you have been near there when you hiked with us to Glooscap Cave.

You can read more in earlier blog entries about author Paul Chiasson and the crew from Ellis Entertainment in Toronto, before they arrived and after where you’ll see the  aerial shot , similar to those shots in the documentary. There is an earlier posting with background and you can see the trailer to the documentary as well.
Go to see the documentary trailer if interested and see if you catch Cabot Shores and do you believe in that majestic settlement appearing and reappearing in the clip?