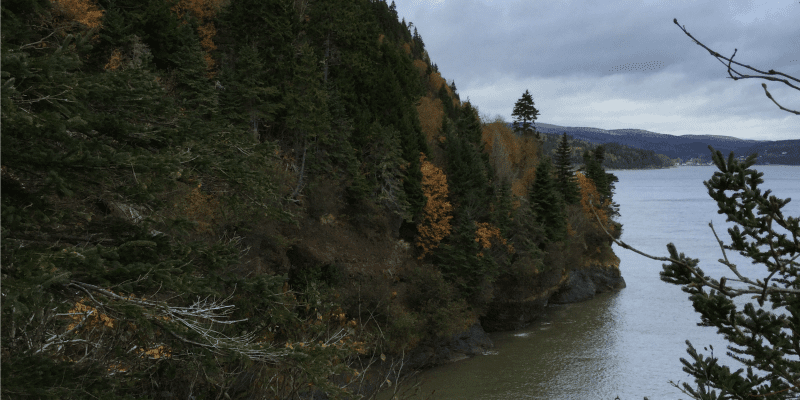 Late this past October Paul and Barbara took some time to make their way around (and across) the Bay of Fundy.

We had previously explored the Minas Basin part of the Bay hiking such places as Economy Point and Cape Chignecto, as well as Blomidon and Cape Split (a favourite), but hadn’t seen any of the South-Western areas of this amazing body of water.  We didn’t, of course, actually circumambulate the entire bay, but we did discover and walk around in many special places around this area.

After a longish drive from Cape Breton and two ferry rides, we arrived on Brier Island, NS’s most Western point, at sunset and managed to take a quick walk to the Western shore which we then explored more fully on the next day.

On the way back to Digby, we hiked to Balancing Rock – a spectacular, but quiet park on Long Island, NS.

On a gray and blustery afternoon we traveled on the ferry across the bay from Digby to St.John, New Brunswick, and drove to Sussex where we stayed and explored Fundy National Park.

Waking up the next day, to our surprise, it had snowed. Not sure if this would curtail our hikes in the park, we set out anyhow, hoping for the best.  The closer we got to the bay, the less snow we encountered.

The place had a rain-foresty kind of feel to it, the ground saturated from all the rain that had recently fallen. We had to pick our way around and across many little streams that crossed the trails.

On our last day, we did hike in the snow, but who cares – it was sunny and we were prepared….

….making our way through a forest to a spectacular waterfall…

….and later treated ourselves to a delicious vegan meal at Veggie Vietnam in Moncton, owned by folks who had recently stayed with us at Cabot Shores