Our heartfelt Thank You to all the Interns, Wwoofers, Helpx-ers and other Volunteers that helped out at Cabot Shores in 2011. What an amazing team! Well done, we could not have made it without you!!

Here are some of the projects you did for Cabot Shores:

In March, when our firewood supply ran low, an arborist from BC, spent 2 days cutting wood along Indian Brook. 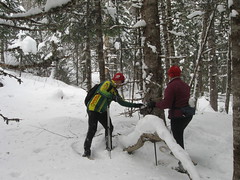 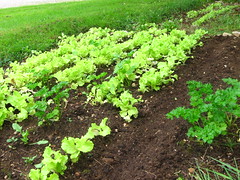 In May, during the few sunny days that month, two of us put in the seeds for the entire early garden crop; the tipi and yurt were put up, set up and decorated; a new trail was made, going along the North side of the Indian Brook to the first waterfall; spring cleaning was completed. 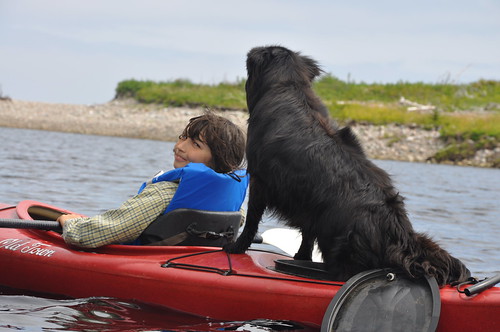 In June the team of summer interns and employees began to arrive, was oriented to Cabot Shores, did training and team building; they tended the gardens, transplanted & mulched tomatoes, cukes, basil & squashes; got canoe loads of seaweed mulch from the beach; learned to yolo-board & kayak; established daily yoga, running and meditation practices; learned to set up the guest breakfast bar; learned to bake bread, make yogurt and granola; produced fantastic staff meals; prepared for the Good Health Festival fundraiser; saw their first moose; reinstalled the walkway to the yurt that was moved by the flood of December 2010; made plans for building a chicken coop; learned to serve guests; mowed lawns; cleaned and set up the Breton Cove farmhouse; made signs; and formed friendships with each other. 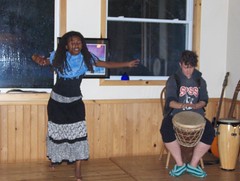 In July, the team drew even closer and also welcomed short term wwofers into their circle; continued with all of the above; helped to host the Good Health Festival fundraiser and participated in the healing arts and Native crafts/ceremony offered during the festival;  cheerfully covered the front desk; developed follow-up systems for guests; dazzled our guests and each other with amazing African dance and Jazzy music performances; prepared; generously organized and delivered a wedding; cared for and interacted with guests; learned to make dark chocolate truffles; took care of each other and of us; guided guests on water and land; began harvesting greens and herbs from the garden; kept up their own and our guests’ spirit amidst many rainy days; built a patio; built a hexagonal, raised chicken coop – the ‘Churt’ (Chicken Yurt); drove beyond Halifax to pick up a bunch of egg-laying chickens, visited a Nova Scotia winery and saw a bit of mainland Nova Scotia and of Halifax; did some fishing; went on whale watches; visited Gampo Abbey and “did” the Cabot Trail. 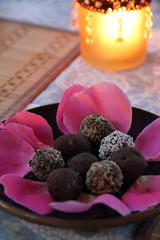 In August, more wwofers joined and some interns left; the team and some guests participated in a firewalk    at Cabot Shores; began building a cobb oven (outdoor clay pizza oven) using clay found on the property; began extending the main deck; continued seeing moose & eagles, and having adventures on land and water; became even more creative in baking breads and making truffles; harvested basil, cukes and more greens; took great photographs; visited Angelo’s Tree House; cared for the chickens and helped to expand their run; continued to care for guests, including guests with special needs; helped with cleaning, tending bar, serving dinner to guests; prepared for and participated in another Good Health Festival fundraisers; and swam in the Atlantic off the Cabot Shores beach; 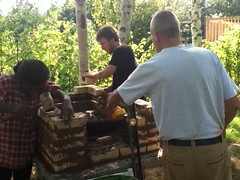 In September, some of the summer interns departed and a new intern joined; the team began and completed construction of a   professional-quality outdoor pizza oven, using clay found at a nearby road construction site – this time it worked! started making pizza dough and produced tasty thin-crust personal pizzas; hiked to Polette’s Cove and camped overnight on the beach under the stars around the hugest all-night drift-wood fire ever; participated in several mushroom-hunting expeditions and had their first taste of wild chanterelle mushrooms; hiked the Spinneken mountain by day, and also by night to watch the full-moon rise over the Atlantic; prepared for and participated the first Shambhala Lineage festival; the tomatoes finally started coming in. 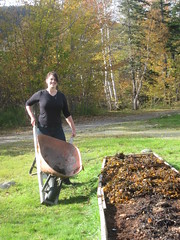 In October, more interns deprted and a wwoofer joined; the apple harvest began in ernest – lots of apple butter, apple chutney and apple crisp were produced, consumed and put away in freezers; green tomatoe chutney was made; a film documenting the construction of the pizza oven was completed; the team prepared for the Good Health Festival Retreat for Breast Cancer Action, Nova Scotia during which 12 breast cancer surviors spent a weekend forging support and friendship, experienced outdoor adventures, including a night walk, had a wood-fired pizza extravaganza and experienced acupuncture and meditation; Canadian Thanksgiving was celebrated; some interns attended the Cabot Trail Writer’s Festival and the Celtic Colours Music Festival; garlic was planted and the gardens were put to rest under a bed of seaweed mulch; and the team put on a Halloween party that included an outdoor pizza-making lunch, apple bobbing and pumpkin carving.

The richness of your accomplishments were delivered with generosity, curiousity, patience, support, skill, willingness, courage and dedication. We are in awe by the many barriers that were crossed, limiting beliefs that were transcended, and the kindness extended to us, our guests and to the team.

Again, we thank you from the bottom of our hearts. Please consider coming back in 2012 and let your friends know about this opportunity – we are accepting applications at this time for our new Service Learning Program – [email protected]